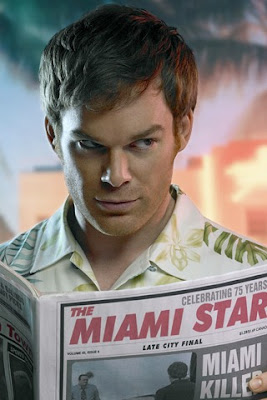 Currently marathoning through Dexter seasons 3 through 5 on Blu-Ray. After that I have what seems like a couple dozen other excellent and acclaimed TV shows to get through. I don't have a lot of spare time, or a lot TV time, so I use it wisely. And it's not hard to use it wisely. I hate it when people bitch and moan about how terrible TV is, and yet seem to watch it endlessly. If you have the time to watch TV, and you're complaining about TV, you're not doing it right.

Stop watching reality shows and sub-par sitcoms and re-hashed cop or hospital shows. As sidekick extraordinaire Andy Richter recently exclaimed, "TV is a privilege and you're wasting it!". We are in the midst of the worst TV programming ever produced in the history of the medium. If you produce or watch or talk about stuff like Jersey Show or that show with those Kardashians on it or something about rich wives of football players, you should ashamed of yourself and reevaluate your life. All the bad TV is all your fault.

Having said that though, we are also in the golden age of television. Despite a lot of great programming which has come before, I don't think there has ever been a better selection of shows available for your viewing pleasure. The last decade or so has given us Band of Brothers, Soprano's, Lost, Battlestar Galactica, Carnivale, Arrested Development, Spartacus, Freaks and Geeks, The Office, Six Feet Under, The West Wing, Rescue Me, Californication, Flight of the Conchords, Rome, Madmen, Firefly, the aforementioned Dexter, and the list goes on and on and on.

So stop complaining, stop watching horrible TV, and stop making me and Andy upset with your insulting of the great and mighty television. Or, y'know, failing that...go read a book.
Posted by batturtle at 11:59 PM