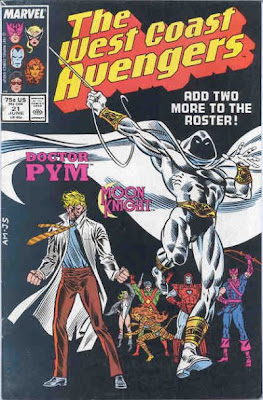 There are many super-powers that I think would be useful to have, but when in the process of packing and moving, I think that Pym powers would be the way to go. Not when Henry Pym was Ant-Man, Goliath, Yellowjacket or Wasp...though becoming a giant or really tiny or being able to boss around ants are no doubt all usual powers to have. I would like the powers of plain old uncostumed Doctor Pym from the 1980's West Coast Avengers days. The ability to take anything, shrink it down to microscopic weightless levels and then grow back to normal size unharmed would be quite useful. Especially to transport comic books...paper is so damn heavy. These are the things I think about and distract myself with when I should be packing. Back to work.
Posted by batturtle at 1:50 PM