Bumblebee is a VW Bug dammit! 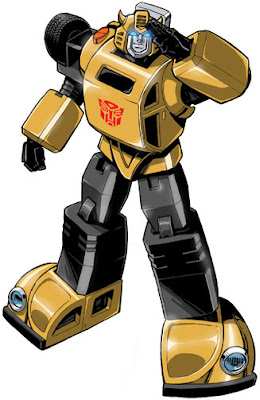 News rolled off the geek-er-web that there will be a Transformers movie reboot. All of my dreams come true! Finally the train-wreck of a movie franchise that Spielberg has allowed to happen to my beloved space robots who turn into cars and stuff characters will have a chance to be fixed. Many people would say that Spielberg is the greatest filmmaker of our time, he's directed masterpieces, he's won all the awards, his films have made somewhere in the area of all-the-bazillions of dollars, and he's even appeared in an Austin Powers movie. It's hard to look the other way on his involvement in the Transformers movies though. There for all the world to see, in a big Transformer-y font in all the trailers was the title-card 'executive producer Steven Spielberg'. To be fair, despite their horribleness, the three films combined have made many non-shape-shifting trucks full of all the monies. He is a filmmaker, but he's also in the business of selling movie tickets, so the Transformers movies were a raging success on that front.

But, the past is the past, and I believe in forgiveness, I believe in second (or fourth) chances. So Mister Spielberg and other big-shot movie-making types, hit me with your best shot. Who are you going to get to turn this ship around and make everything well in the world for us geeks who are all dieing to see an awesome live-action Transformers up on the bi-screen in all it's glory? There are so many great sci-fi action / adventure filmmakers out there at the moment, so many who could bring something new and fresh and exciting to the franchise. You already make money with these things, you've proven that, now let's make 'em good! Give us a good summer blockbuster. Get JJ on this project, or maybe Jon Favreau or Brad Bird. How about that guy who directed District 9? That movie was great sci-fi, it even got nominated for a Best Picture Oscar.

And, the director of the reboot Transformers movie is...(dramatic pause)...Michael Bay. What the F!?! The same Michael Bay who directed the first three!? You mean some other Michael Bay right? It's just a coincidence that they have the same name? Pretty unlikely I guess...but possible. Nope...same guy. Awhhh...man, sometimes I really hate you Hollywood. Always getting my hopes up and then smashing them against the rocks. I kept waiting to hear the Michael Bay was going to move on to ruin something else that I loved. Maybe he'd direct the Bone movie or something like that.

But no, Michael Bay will return for more blurs of giant hard to comprehend cg robot blurs, slow motion action, crappy pop songs and anorexic starlets. Sad geek days indeed. At least you can't take the animated Transformers movie away from me, it will always be awesome.