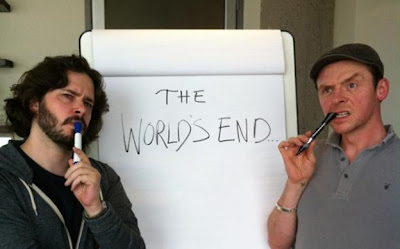 To say that I'm a fan of Edgar Wright's would be an altogether insanely gross understatement of the facts. I loved his TV show (Spaced), I loved his three movies (Shaun of the Dead, Hot Fuzz, Scott Pilgrim vs The World), I even loved the movie that he was just an executive producer on (Attack the Block).

One of the coolest and mad with geek cred power moments I ever had happen to me was when Edgar and I had a bit of a back and forth via the interweb about a screening of Scott Pilgrim that we were having at the Mayfair. He was kind enough to give us a shout out online and sent along a hello message to the Mayfair patrons. When I was intro-ing the movie and said that Edgar and I had some communication recently, there was an audible geek asp from the crowd.

Well, news hit today that Edgar Wright's next film will be Kolchak: The Night Stalker, starring Johnny Depp. So, good news that a new Edgar Wright movie is officially on the horizon. And interesting news that it's based off a great pre-X-Files creepy classic tv series. Bad news that this will delay the mighty reunion of Edgar, Nick Frost and Simon Pegg for their end of the world movie. I guess I can forgive him for taking a gig with the biggest movie star in the world considering his last (amazing) movie tanked at the box-office. He can hopefully use his clout off the success of Kolchak to get financing for the next chapter in the Blood & Ice Cream trilogy and bring further geek joy to the masses.
Posted by batturtle at 11:51 PM