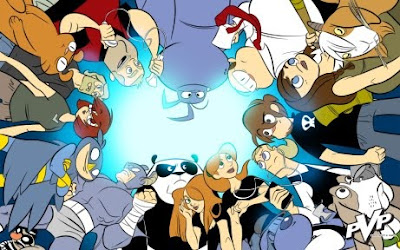 I haven't been reading the online comic strip PVP since day one, but close. I was introduced to the comic via more computer savvy friends, and once I started reading the thin I was instantly hooked and haven't missed reading a strip since. The basic premise is that it's about a bunch of people who work at / publish a video game magazine...and one of them is a giant friendly blue troll. And now time has flown and the damn strip in almost 14 years old.

Like any ongoing episodic series, various arc's might be slightly difficult to jump in the midst of. Luckily though, the complete archives is available to read off the site. So if you're really ambitious you can o all the way back to day 1 strip 1.

What I like about PVP is it's a true comic rags to riches success story. Or at least a not getting paid to a making a living story. A few years back, in an age when professionals working in more traditional comic book / comic strip medium thought that the online comic business model was a foolish one, Scott Kurtz's PVP slowly built a tiny empire in it's corner of the information super highway. Thanks to fans going directly to the source to buy t-shirts and prints and book collections amongst other merch, he makes a living without having to sell his creations to a publisher or charge his fans to read his work. Imagine a world where Peanuts or Calvin & Hobbes or The Far Side existed in the same realm? There is so much evil and annoyance on the interwebs, so it's nice for a PVP to slip through the entertainment cracks every so often and prove that the net can be used for good as well as evil.