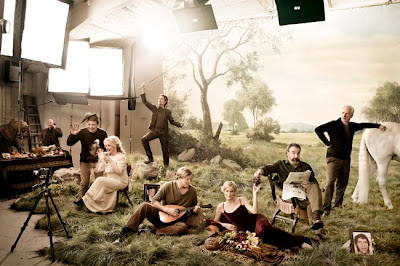 Family Day at The Mayfair is always a little bit of a madhouse. Thanks to the generosity of realtor Tracy Arnett, a couple times a year the theatre presents a free screening along with free popcorn and a free drink for one and all, this time is was the motion picture perfection that is The Princess Bride.

The turnout was pretty incredible, so much so that unfortunately upwards of a couple hundred people had to be turned away. The line-up was still around the block as the capacity reaching 325th person came through the doors. Almost everyone was very understanding that sold out means sold out. The handful that weren't understanding couldn't quite understand that it really didn't matter if a friend was saving a seat for them, when capacity is reached it's unlikely that someone who actually stood in line would exit the theatre to make room for you. And if on the opposite side of the coin, you have saved seats for someone who hasn't arrived yet, it doesn't matter because there are already 325 people in the place. Doesn't matter how angry you get, 325 people + 2 or 3 more people makes more than 325 people. I know that math is hard, but that's relatively simple logic to comprehend.

Negativity from one bad apple aside, the spirits of the rest of the lovely Mayfair patrons really made my day. Everyone was very understanding that free popcorn can only be popped and doled out so fast. When the candy bar tip jar was thieved, rumor of the crime spread and a new tip jar was quickly re-filled. When the film snapped and burned, a riot didn't break out, and there was a rousing cheer of applause when things were fixed and the film started running again. There were a number of wide-eyed adorable little kids in attendance enjoying their first big screen movie experience (hopefully forever tarnishing the multiplex movie watching habit for them). And, after the movie, so many smiles and thanks and praise lavished towards the glory of the Mayfair.

Twas a good Mayfair day all in all. And if every screening was sold out with 200 people turned away, all of our money woes would be gone and we'd have Batmobiles to drive, monocles to wear and robot butlers to boss around.