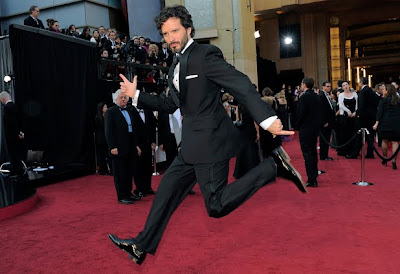 I only cared about one thing in regards to last nights Academy Awards celebration, and that was whether or not Bret McKenzie would walk away with an Oscar for his song 'Man or Muppet'. He won, The Muppets gets an Oscar, and even though I still think it's strange that there were only two songs nominated instead of the traditional five, that won't tarnish that his work on the film was true cinematic musical brilliance. And the win prevented our head programmer and MC of the night from tearing down the screen and burning the place down, which he said that he would do if Muppets was wronged.

I was also hoping that Rise of the Planet of the Apes would have won it's sole nomination in the Visual Effects category, but Hugo took that one. Andy Serkis should have been nominated for best actor, but I think there are still qualms from the Oscar powers-that-be as to whether or not CG assisted performances are acting. What Serkis did in Apes was pretty damned amazing, playing his character from a baby through adulthood, something pretty much impossible without current film special-effects technology. Hence the effects team getting recognized would have been at least some kind of recognition to the groundbreaking work that happened in the creation of the Caesar character. As long as Transformers 3 didn't win though, that's all that really mattered. It making all the money in the world is bad enough, I don't want the words 'Oscar winner' forever intertwined with a tragically awful excuse for a movie like Transformers 3.

Despite some negative vibes thrown at host Billy Crystal from some, I thought he did a fine job. I question that maybe there should be less sketches and more time for awards presentation and music performances, but thought he was quite funny.

Gore Verbinski deservedly won for Best Animated Feature with Rango. A year where PIXAR dropped the ball with the grand an unusual sub-par-ness for them by going back to the well with Cars 2 allowed for something a bit more off-kilter to grab the prize this year (PIXAR will be back next year to win with Brave). Another winner was Christopher Plummer, Canadian and Klingon, which garnered a giant Canadian content round of applause from the Mayfair crowd.

All in all another great Mayfair night, even though tallying the Oscar ballots from a couple hundred hopeful predictors dreaming of winning a stack of movie passes makes for a bit of a harrowing and exhaustive night.
Posted by batturtle at 11:51 PM