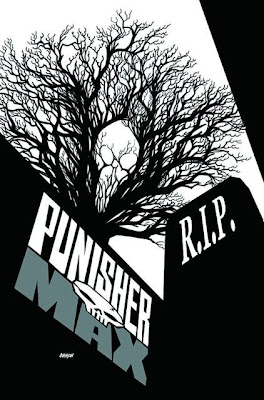 I managed to squeeze in the reading of one comic book into my hectic schedule today. Somewhere in-between signing a lease on a new apartment, doing a bunch of sit in front of the computer writing work, watching Dexter season 5 episode 1, and sound crewing on the first night of a low-budget indie film shoot. The comic I managed to read was Punisher Max #22, released last week from Marvel Comics.

Now, the following is a pretty heavy spoiler, but also not a heavily guarded secret. The cover shows a grave and a RIP gravestone with a tree showcasing a stylized Punisher skull logo amongst it's branches. And, not trick or twist or elaborate dream sequence, The Punisher finally dies in this issue (or I guess in last issue, this one's about the aftermath). Writer Jason Aaron had Frank Castle down, and from what I understand, his whole pitch for this series was to kill off the character. He knew how to get inside Frank's head, he had a bit of a new spin on this decades old character, and he knew how to kill him. The art by Steve Dillon, as per usual is simple, clean, detailed, full of expression and life and amazing. He brings a humanity of the often over-the-top world of comic books that is unmatched.

I've always liked The Punisher. Probably because I like western's, and Frank Castle is no different than numerous Clint Eastwood big-screen anti hero's. Instead of a cowboy he's a soldier, but other than that he fits the mold of the soul scarred warrior out for revenge against evil for the deaths of those he loved.

I've always been amazed that Hollywood hasn't been able to get a Punisher movie right. It's not that hard, I have a feeling that they're over-thinking it and trying to hard to be smart. Three different actors have tried to play Frank Castle, all three in failing projects. You would think that a movie about a fellow in a black T-shirt with a white skull on it running around NYC shooting bad guys would be easy enough to cobble tgoether into an enjoyable action-packed revenge movie. So far, no success.

Don't fret Punisher fans, bad movies and the death of the character do not mean the end. The Max line of Marvel comics exist in it's own adult rated world. So although Frank is actually dead and buried, he lives on in the original Marvel Universe to be a bad role model to geeks everywhere and to kill another day.