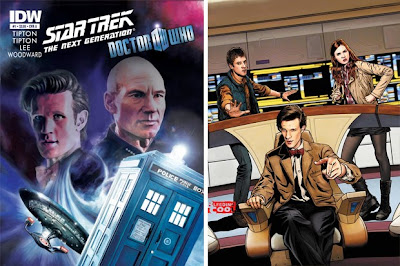 The best thing about comic books is that the only limit is the writer and artist's imagination. Or the limit of giant corporations who are the copyright holder's of legendary characters and famous fictional universes, and their willingness to take payment in exchange for the lending out of these characters.

Comic book publisher IDW has gotten permission to do a cool thing and crossover Doctor Who with Star Trek. More specifically, the current Doctor Who and the 1980's/1990's era Next Generation of Star Trek. Maybe the most shocking thing is that it took so long for these two franchises to cross-over in comic book form. Such meetings are nothing new in comic book lore. Batman has battled Predators, Superman has survived a run in with Aliens, Spider-man teamed up with Red Sonja, Hellboy and Savage Dragon fought monsters side by side, and believe it or not The Punisher has crossed paths with Archie and his friends in Riverdale. And, somehow beating Doctor Who / Star Trek to the punch, Star Trek did a cross-over with the X-Men. Seriously...it's real...go look it up!

You can do anything in comics without the limitation of budget constraints, time limits, or the impossibility of getting together the cast of a TV series at the age they were 20 - 25 years ago to work alongside the cast of a present day TV show. Or if you could pull that off, it would be really expensive and involve lots of special fx, or a time traveling police box.

I guess the same could be said for non-comic book literature of course, that the limit is only in the writer's imagination. But comics have pictures AND words together...and hence are better.
Posted by batturtle at 11:51 PM