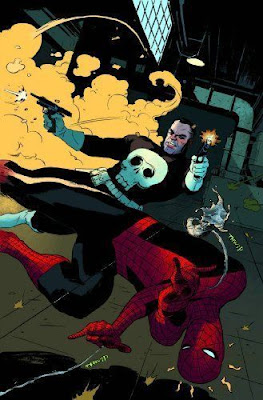 Time flies, and it's already been four or five years since mad with power editor-in-chief of Marvel Comics Joe Quesada hijacked the finale of J Michael Straczynski's acclaimed and fan-favorite lengthy run on Spider-man. Quesada had long been vocal about how he wanted a single unmarried Peter Parker, but that he didn't want to resort to a reboot of continuity the way the DC Comics competition had made use of a couple times.

Instead, his bright idea was to have Peter and his wife MJ to make a deal with the devil to save the life of Aunt May. The loving couple gives up their love and the wedding is erased from reality, and in trade for this Aunt May doesn't die. It was a sub-par ham-fisted excuse for a story. Even in terms of the tale taking place in a world of people running around fighting each other in brightly coloured outfits, it just didn't make sense. It put an end to what was a really great run of Spidey books, and most thought it was being done more to appease a company that cared more for streamlining it's characters to be more like their movie storylines.

I gave up on Spider-man at that point. I even nerded out enough to send a really nasty letter to Marvel that actually got nice response from a batch of Marvel employees (not fro Mr. Queseda though). The problem is that I really like Spider-man, but the handling of this MJ storyline made me comic-geek sick. I managed to get my dose of Spidey in his Avengers and Fantastic Four appearances (he's on both teams somehow), but avoided the various monthly Spider-man offerings. I did so because like many a geek, I am petty and hold a grudge. It's either that, or you end up being one of those poor souls who hates the X-Men but continues to buy a dozen titles a month just 'cause the book was cool when you were a kid.

Anyhow, the point of this rant is that thanks to my return to the making use of the library, I read a Spider-man book. Crime & Punisher collects Amazing Spider-man #'s 574 - 577 along with some other tidbits, comics that were originally published right after the Spidey reboot. Like any collection by various contributors, thins are a little hit and miss. The first story is by Marc Guggeheim, a writer I despise, so that didn't go so well. Other stories are by writers Joe Kelly & Zab Wells, who have a much better handle of how to write the character. The best part of the book is the portions with art by the also amazing Chris Bachelo, whom I've been a fan of since Death & Generation X (go read those, they're good!).

All in all a good book, but all the way through I could not stop thinking about how stupid the chain of events to get to this place were. At least I could stick it to the man a little bit by not buying the thing.