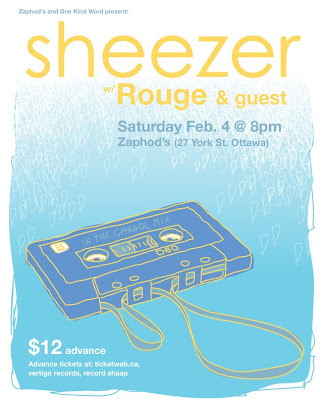 One of my favorite bands in all of the universe makes their grand return to our nation's capital on Saturday night. Sheezer, like Weezer, are awesome. They sing the same songs, the big differences being that Sheezer are girls and Canadian. Both things that may make them an even better band than the original thing (I'm just kidding of course, I am super mega Weezer fan). I've seen the real Weezer twice, and both concerts were incredible indeed. The latest time I saw Weezer included the unexpected turn of events of me helping hold up an outhouse that Rivers Cuomo was standing atop while singing. I have seen Sheezer three times, one of those times they were all in Sailor Scout attire, all three times they have praised Ottawa as a favorite place to play. I look forward to viewing number four tomorrow, and if you don't hear from me afterwards it's because I've hit the open road with them Almost Famous style.
Posted by batturtle at 9:01 PM