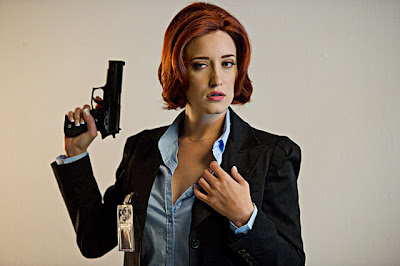 The submissions were judged by adult film star Kimberly Kane, pictured above from an X-rated X-Files re-imagining in one of the few photos of her that can be found online which are of the PG variety. If your interest isn't piqued enough already, you should also know that the night will also feature beer for sale in the candy bar and showcase a live performance from the Sin Sisters Burlesque Go-Go & Variety Show. Relive the heyday of controversial underground back-alley cinema while simultaneously supporting independent film-making, Friday night at 9:30, only at the Mayfair.
Posted by batturtle at 11:51 PM