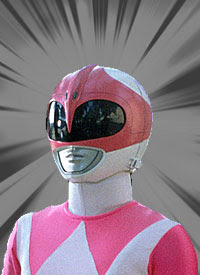 Late last night I worked on the tear down of a stage that I helped set up on Saturday night for the Juno Awards. I'm not even sure what exactly went on there, I think some autograph stuff and a couple of songs performed by bands I've never heard of. It was at a mall, and I was quite curious if anyone actually cared about this kind of thing and if anyone would show up. Evidently, people can be lured out for shopping mall based entertainment of the free variety. Rumour has it that upwards of a couple thousand people were in attendance, which blows my mind a lil' bit that there's anyone who would actually be a fan enough to partake in pop music presented in such a manner.

It reminded me of a different kind of mall gathering that I attended a dozen or so years ago while in Florida. My friend and I were flipping through the newspaper (that's how long ago this was) looking for something to do. He flipped the page, an ad caught our attention, and simultaneously we both exclaimed "The Power Rangers are going to be at the mall!". Our other friend we were with was not impressed, luckily his sister had a better sense of humour and she ave us a lift. Even though we weren't exactly the Saturday morning target audience age, we were fans. In fact, my friend had a life-size cardboard cut-out of the Pink Ranger in his bed-room. Hence, we were fairly ecstatic that this was going down while we were temporarily residents of Florida.

The Green Ranger and the Pink Ranger were there signing autographs to publicize the upcoming season and remind kids to buy toys and various other bits of Rower Ranger merchandise. It was complete and utter madness. There were traffic jams on the way there, the place was packed, and people in attendance weren't being very mature or level-headed at all about the situation. After the actor's hit the stage, it was akin to The Beatles stepping off of an airplane onto American soil in the early 1960's. Parent's were losing any sense of human sanity, kids were losing their minds, and security was completely overwhelmed. The frightening thing was that of course because we were in Florida, the overwhelmed mall-cops were all brandishing fire-arms. In fact, I would guess that many of the parents and maybe children had guns too. I saw parents on their way to partaking in fisticuffs, and one throw coffee in anothers face. It was on the verge of complete societal breakdown, riot squads and tear gas were imminent.

We didn't actually get to meet the Power Rangers, but we did get autographed head-shots. Mall people resorted to giving out stacks of pre-signed photo's in hopes of quelling the impending insanity of a Mall destroying mall. We were lucky to get out alive. Very glad the we got to go though, if we had missed it we would have felt as regretful as Homer did that time when he didn't go to the mall to see Mr T.
Posted by batturtle at 8:34 PM