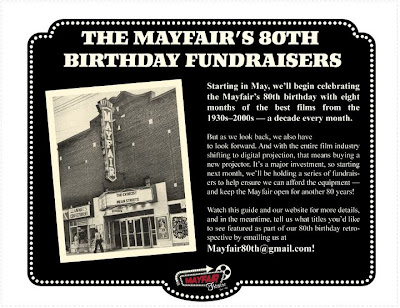 We live in a world that's in a constant and sprinting pace of putting us ever closer to actually living in what we would consider a sci-fi like future. The taken for granted magic that is the smart-phone was something that a few short years ago would have been something that only James Bond or Batman might have had.

All forms of media are in the midst of a giant upheaval. It seems that sooner or later all form of literature will be read on a tablet, music will only be listened to via an mp3 player, and TV and internet will be officially smashed together into one form of interactive entertainment.

The same technological shift has hit the theatrical movie game. Despite any and all respectable indie repertory cinemas fighting against the evolution away from film, the future is upon us. We at the Mayfair won't get rid of our 35mm stuff, especially because we have an awesome 35mm library hidden away in the Mayfair catacombs. The issue is, that by the end of the year, pretty much everything movie related will be distributed in a digital manner. Not just the big-budget mainstream kind of stuff that we've shown in the past like say Harry Potter, but everything. Whether it be a kids movie, an alternative documentary, a foreign offering or an Oscar winner...none of it will exist on film-stock anymore. Meaning that anything that we've screened in the past lil' while that has had success, would be unable to be played in our current format. We wouldn't be able to screen The Muppets or The Artist or Monsieur Lazhar.

Now, we get by and pay the bills and pay the employees, but the harsh fact is that none of us are ever going to get rich off of running the Mayfair. Hence, we don't have tens of thousands of dollars in the bank to pay for something like a fancy new digital projector. Throughout our 80th Anniversary, we're holding an ongoing fundraising event to raise cash to be able to afford such an immensely expensive piece of equipment. We're having a number of special screenings and events, there will be auctions and prizes and poster sales, and even good ole' fashioned banks for you to give us your hard earned spare change in.

It's going to be an uphill battle of work, but already patrons have been very kind in their charitable offerings. Every time I'm in the box office and someone donates some cash it makes my soulless Grinch heart grow three sizes too big. And local Ottawa places have already been kind enough to donate prizes that we will auction off, stuff like tickets to see the Lord of the Rings concert at the NAC. So keep an eye out for our various fundraising events that we're having throughout 2012, and most importantly, come watch stuff at the Mayfair for the greatest movie theatre going experience of all.