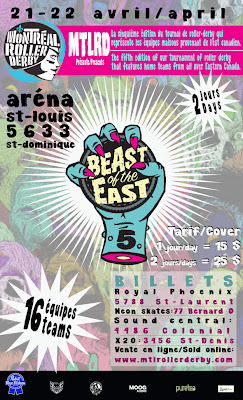 The opening bout of Beast of the East involved our Slaughter Daughters, the defending champions. It was scheduled for an insane 8:00am start, and was followed by shortened matches for the rest of the day. I'm not going to have great sports-journalistic skill in reporting the scores and events on the day, it was too much of a blur. I'm sure anyone interested can easily find the score-cards online.

By the end of the day I was completely exhausted, and all I had done was watch a bunch of derby. So you could imagine how my battered and bruised friends who actually partook in an epic day of actual intense athletics felt. My Slaughter Daughters came back to win their next two games, so they get to go on to day two, along with the three Montreal teams that my friends belong to now. Tomorrow at least once a team with a former RVRG member will play against us, and I know it will be a strange experience. As I commented before, it's like seeing Gretzky in a silver and black Kings jersey playing against the Edmonton Oilers.

We walked home through the miserable Montreal weather, we are staying at a derby friends house. We sat around eating some snacks and chatting and feeling quite worn out. Was shocked to look at my phone and see that it was a mere 9:45pm, it felt like we had been up all night and it was 5am or so. I think that starting derby at 8am instead of the more usual 7pm has completely messed with all of our inner-clocks. We will go to bed early, dream of girls skating around bashing each other to the tune of rock n roll and whistles, and wake up ready for another day of derby madness.