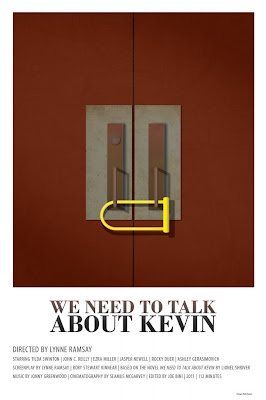 We Need To Talk About Kevin is yet another amazing movie with a brilliant performance from Tilda Swinton. Watched it tonight at the Mayfair and it kept me in rapt terrified attention from beginning to end. There's this looming sense that everything is going to go horribly wrong pretty much from frame one, and the horribleness unfolds throughout the story. Impressive turns from Tilda Swinton and John C. Reilly is nothing too shocking, but what really stands out are the creepy villainous skills of all three young actors playing the various ages of Kevin. Some wouldn't classify the film as horror, it is though, just not the horror genre that involves a guy in a hockey mask chopping up teenagers. Although this is not the kind of film that you would likely buy on Blu Ray and make a tradition of watching with the family over the holidays, it is a film that is close to brilliance on all sides. It's the kind of film that leaves you a bit shell-shocked as the credits roll as you sink in what you just watched. Don't watch it if you are on the verge of contemplating starting a family.
Posted by batturtle at 7:35 PM