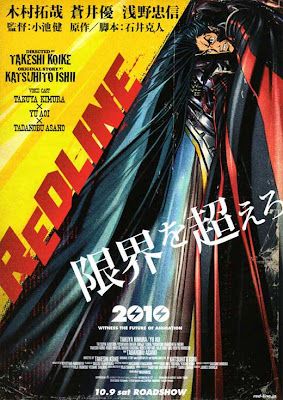 Anime makes a return to the Mayfair tonight with the movie that Speed Racer wishes it was, Redline. Highly praised in animation circles, the movie makes it's Ottawa premiere tonight at 11:30pm with an encore screening Sunday the 15th at 9:00pm. If seeing an excellent cartoon wasn't an inciting enough thought, we will also have some prizes to give away from Lost Marbles. And I promise that it will be much less offensive and insane than previous late night anime offerings like Urotsukodoji: Legend of the Overfiend (Redline isn't banned in any provinces). Just hold on to your seat and get ready to be knocked out with a hell of a lot of speed lines.
Posted by batturtle at 4:15 PM