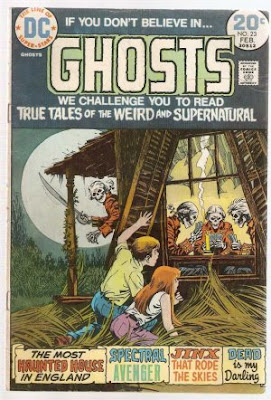 I resisted the urge to get more comics from the library while returning stuff today. There's always something more that I want to read, but I really want to try to put a dent in the giant stack of unread comics that I have waiting to be read at home. The bottom drawer of my dresser is filled with three stacks of cheap bin comics that I haven't looked at yet.

There's a lot of great comics being produced currently, but it's hard to match the pure imagination, diversity and insanity of comics that were produced fourty or so years ago. Each cover was a masterpiece, there were heroic war comics, scary ghost comics, and super-hero books were actually fun and of interest to kids. Another plus is that many of the issues are self contained, so you aren't forced to buy dozens of cross-over books to follow a story.

The best part is that these kinds of comics can easily be found in cheap bins at conventions and stores. If you're lucky you can even find them at garage sales, though often people running garage sales are mad with delusional power and think that old comics actually have a monetary value. They're a great cheap option to pick up for kids (or grown-up folks) looking to read a bunch of comics. Though not so great if you already have a couple of hundred awaiting you in an unread state at home.

Plus, almost as entertaining as the comics, are the ads. The advertising encouraging kids to behave nicely for their parents so that they will then think they are responsible enough for gun ownership is worth the price of admission alone.
Posted by batturtle at 4:38 PM