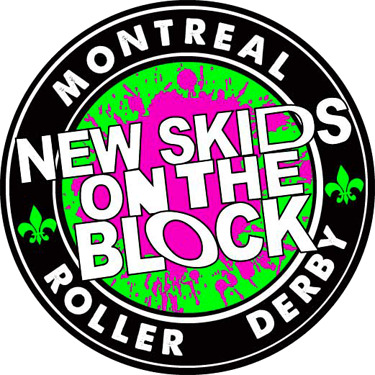 Road-tripped to Montreal with my girlfriend and a pair of roller-derby girl friends to partake in the madness that is the Beast of the East tournament. Getting into a car with a bunch of girls and traveling to far off lands for derby related events is nothing new for me. I've accompanied my Rideau Valley Roller Girls gang to such exotic locales as diverse as Sudbury, Pittsburgh, Rochester and more.

The girls at Montreal Roller Derby didn't think it was enough to host a giant weekend tournament, they figured they'd also play a bout on Friday night. The New Skids on the Block handily defeated Buffalo's Lake Effect Furies 326 - 62.

Since last season, four of my derby friends moved from Ottawa to Montreal, and they managed to land themselves on three different Montreal teams. Meaning I walked in to the rink, made my way to the merch table and bought three new T-shirts. Being a loyal friend, I'll be costume changing my attire depending on which friends team is in the midst of battle. At the likely event that out of the sixteen teams, sooner or later my friends will play against each other, then I will tape two shirts together and feel stressed.
Posted by batturtle at 11:26 PM