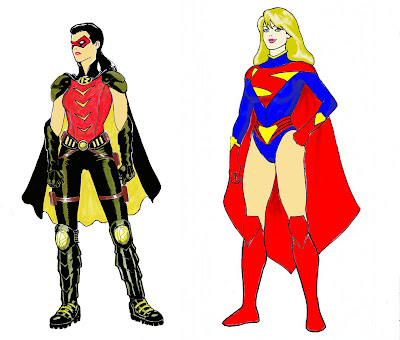 As much as I've enjoyed much of DC Comics reboot of their super-hero universe with The New 52, my biggest complaint would be in the area of character design. Much of the costuming chores seem to have gone to Jim Lee, and although he is maybe the most popular comic book artist of our time, I can't stand his design skills. Everything he does is overly complicated, his Cyborg looks like a Michael Bay Transformer.

So, I was glad to see that Kevin Maguire was handling the design gig for The New 52's introduction of Earth 2 into the rebooted continuity. I've been a fan of Mr Maguire's work since he drew the 1987 relaunch incarnation of the Justice League. His cover for Justice League #1 is hands down one of the most famous and copied covers in the history of the medium, and over the last 25 years he's worked on pretty much every comic book character you've ever heard of. His resume includes work on Captain America, Spider-man, X-Men, Fantastic Four, Superman, Batman, and he's done some great indie stuff like Strikeback and Trinity Angels.

The only bad news is that with the news of his involvement in DC stuff, this means there are a couple more comic books that I am now looking forward to checking out. More money to spend, and more stuff to read in my always too packed, not enough hours in the day schedule.

What I like about his designs is that there's a realism to them without losing the super-hero aesthetics. Robin looks like she could actually wear that outfit while jumping around rooftops of Gotham, no high-heels, no extra-long cape tripping her up. This new Supergirl isn't dressed like a stripper, and is actually in an outfit that wouldn't be inappropriate for a girl to wear on Halloween. They should've let him handle the initial DC reboot designs too and maybe Batman and Superman wouldn't look all weird without wearing their underwear on the outside of their pants.