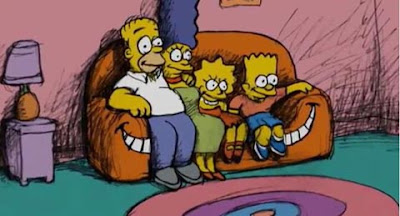 When The Simpsons comes up in conversation, some believe that it is past it's prime and should have gone off the air years ago. I've never given up on the show, and although it has had it's peaks and valley's over it's twenty-three years, I think the it is always worth watching. Especially since I've grown completely fed up, disgusted and bored with the animated universe of Seth MacFarlane, I've embraced and appreciated The Simpsons more and more.

The last few years they've gone out of their way to kick their cool factor up a notch as well. Somewhere around the time when they started working on the movie I think is when efforts got kicked up a few factors. I also think that they now have fans working on the show who grew up watching the series, and now have their dream jobs. They've employed writers like Seth Rogan and Ricky Gervais, had weird guest-voices like former comic book writer and current warlock Alan Moore, and opening credit sequences designed by Oscar nominated rebels like Banksy. Last nights opening sequence was a very impressive piece done by one of my favorite animators of all time, Bill Plympton. If they continue at this pace, I have no qualms if they feel like making the show for another few decades. Simpsons at its worst is still much better than watching a Family Guy episode that consists of a bunch of characters barfing for six or seven minutes straight.
Posted by batturtle at 2:23 PM