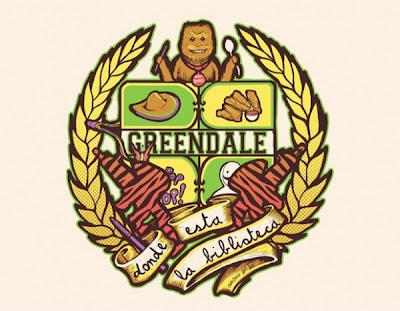 I am shamefully behind on my TV watching, which is a shame because I think that we are in a golden age of television. Yes,I know that the medium is filled with D-grade celebrities eating bugs and douche-bags eating giant slabs of hamburgers and horrible low-brow laugh-track sitcoms and a bunch of offensive tiresome Seth MacFarlane cartoons. Disregard all of that trash though, and TV has endless high quality comedy and drama being produced. There is so much in fact, that barring suddenly being independently wealthy and not needing to sleep, I will never ever catch up.

The latest small-screen episodic masterpiece that I've taken to watching is Community. It came highly recommended, I knew pretty much nothing about it, and I rather quickly fell in love with it. I enjoyed it so much, that I am pleasantly surprised that it is currently in it's third season, because most tv shows that I love get cancelled rather quickly. Shows the likes of Firefly, The Tick, Greg the Bunny, and Andy Richter Controls the Universe (and the list could ramble on) all succumbed to cancellation before reaching a second season.

Community features a very talented cast in a rather normal tv show premise of a bunch of classmates in a community college. Premises of tv fare like this, the surroundings don't really matter all that much, it's the characters and their scenarios and the quality of the writing that are important. There's nothing too groundbreaking in the concepts of people hanging out in a bar, a comedian and his jerk friends doing nothing in New York, or doctors operating on patients during a war...but all are classic television.

All I knew about Community was that I had seen it's star on various late night talk shows, and that he was funny. I also was familiar with one of his co-stars, Donald Glover, because there was a bit of a rumour / geek push to get him to play Spider-man in the rebooted franchise. And that Chevy Chase is on it, and evidently he is difficult to work with. Otherwise, I was coming in to the show with a pretty blank slate as to what I was going to see.

It was so funny that on numerous occasions I hit the 'I'm laughing so hard I might die' danger zone. And, it is chock full of geek references ranging from 28 Days Later to Sesame Street to Batman, which is an easy way to win me over. Of course, the show it so good that it means it will likely be cancelled in it's third season (I just got through season one). How can shows like Two and A Half Men or According to Jim last for like a decade, and great stuff not? Damn you Nielsen families, it's all your fault! Watch better TV!
Posted by batturtle at 10:35 PM