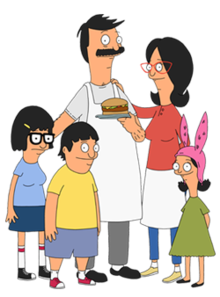 Bob's Burgers serves as further proof that Seth McFarlane should wrap up the various versions of Family Guy that he produces. Unlike the trio of McFralane series that clog up Fox's animated time-slots, Bob's Burgers is original, funny, and actually has plot-lines to their episodes. Where-as Family Guy has a mish-mash of non-nonsensical dream sequences and seems to be on a dare-a-thon to see how offensive they can be before being banned from television forever. McFarlane should wrap things up and go concentrate on his live-action endeavors. I'd much rather Fox's animation department budget go towards Bob's Burgers instead of a fourth McFarlane show (which if we're not careful will be a Flintstones re-boot. Seriously!)

Posted by batturtle at 4:23 PM