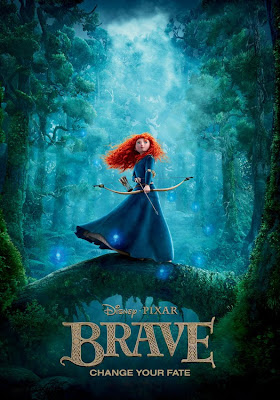 Spent a chunk of the day watching The Muppets on Blu-Ray, watched the film with audio commentary and then all of the bonus features. On the disc was the trailer for Brave, which after the sadness and disappointment that a sub-par effort the likes of Cars 2 has re-instigated my worship of PIXAR. Up until Cars and Cars 2, I thought that PIXAR was pretty damn close to movie producing perfection. All of their movies were really good, critically acclaimed, award winning and happened to all make a truck full of profits.

Then Cars came along, which was not the worst movie ever made, but was the first movie that they did that left me feeling 'meh' at the end. Then a few years later they hit us with a sequel that seemed for the first time in their history to be done only for financial gain, and not because they had a good story to tell. Toy Story 3 had a great script, Cars 2 seemed to be done to sell Happy Meal toys and car shaped slippers and backpacks to kids. Especially in an animation world that was now producing really good non-PIXAR computer animated films the likes of How to Train Your Dragon, Cloudy with a Chance of Meatballs and Puss in Boots, this was just unacceptable.

I think Brave is PIXAR waking up, feeling shame, and wanting to be excellent on all sides again. My faith in the animation studio was happily restored. Then the next trailer was for the Cars straight-to-DVD spin-off, Planes. Meaning that now PIXAR has resorted to producing films the style along the lines of a Simpsons PIXAR parody. And again, I felt sad and angered at the state of most of what goes on in Hollywood film production.
Posted by batturtle at 7:53 PM