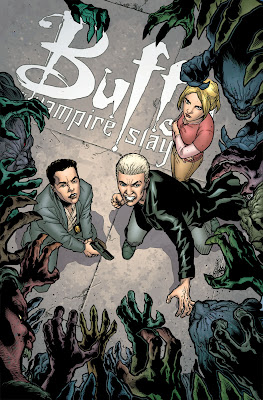 Back when Buffy was a TV show, my routine was that I would watch the latest episode and lose track of time and then yell a "son of a bitch!" when the 'Executive Producer Joss Whedon' credit hit the screen at the end of the show. The cursing would come because I thought there was still more show ahead, and a cliffhanger had just punched me in the brain. I enjoyed watching the show as it came out in weekly increments. I think that watching TV in giant marathon runs is kind of cheating. You don't get that time in-between stories to ponder and discuss and go crazy in anticipation of the next show.

I am a traditionalist when it comes to comic books as well. Hence, I read Buffy (currently in it's second comic book season, ninth over-all season) month to month and not in collected form. This season is being produced in a slightly different manner with Andrew Chambliss writing Buffy and Christos Gage writing Angel & Faith off of the over-all story as laid out by creator Joss Whedon, and under his supervision as he serves as executive producer on the books. For Buffy season 8, Joss was on hand to write a bit more, and there was a rotating crew of Buffy-verse TV writer alum and Joss Whedon's comic book writer favorites handling story-arc's.

Andrew Chambliss wrote five episode's of Dollhouse for Joss and has proclaimed himself to be a mega Buffy fan. I think he's doing a fine job handling the reigns of the franchise while Joss is off assembling Avengers.

Much like it's live-action predecessor, the last two issues of Buffy (which I read today in a bout of catching up on comic book reading) both made me go "Gah!" in a 'son-of-a-bitch!' like manner as I flipped to the last page of the story. If you are a fan of Buffy and Joss Whedon and are not supporting the comic, you are a monster. That may seem a little bit harsh, but it is true.