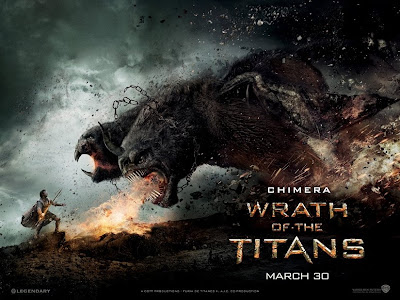 It's not often that I venture outside of the Mayfair to watch movies on the big screen. I snobbishly refuse to give any money to the multiplexes, mostly because every time that I o I have a bad experience with a sub-par quality presentation like the movie being presented in the wrong aspect ratio or candy tossed up and plastered on the screen. I also find that you are much more likely to be pestered by other patrons chatting on cel phones, texting, talking amongst themselves, or getting drunk while the movie plays.

So, along with that negativity and because the Mayfair is the bestest way to enjoy a film, the only time that I partake in non-Mayfair movie watching is when I can do so for free. The latest free pass that I got a hold of was for the sequel to a remake, Wrath of the Titans. The Clash of the Titans was pretty awful, but I am a glutton for punishment, have no taste, and will watch pretty much anything. I wasn't expecting much, and I didn't get much.

When I see a movie like this from a studio like Warner Bros, a budget of $150 million, featuring actors the caliber of Liam Neeson, Ralph Finnes and Bill Nighy...I would like to think that all those factors could cobble together something at least semi-passable and a little entertaining. More often than not with this kind of stuff, it seems like no one is really making that much of an effort. As the end-credits roll, we've gained no attachment to the characters, had no plot-line to follow, and sit there feeling a resounding "meh".

Added to the drudge of the film is that it's presented in the biggest ruse in cinema, the glory of 3D. There wasn't a single part in the movie that was enhanced by it's 3D presentation. A couple of times embers floated by, and once the camera took a dive down a long tunnel, otherwise any hint of 3D was completely non-existent. I'm shocked that this snake-oil salesman of a trick continues to lure people to pay extra at the multiplex box office. In fact, the only time you really notice 3D is in the credits, which you wouldn't think that anyone would be all that enthused to pay extra money to enjoy. The only good news is that the film has only made $125 million worldwide (yes, it's insane that the words 'only made' in front of a number that big), so will maybe only brake even. Fingers crossed, that means that the planned third film in the series called Return of the Gods will die before it's put into production. Then I won't get another free pass for that and have to see another horrible mythology movie starring that guy from Avatar.

It was a waste of a couple of hours, but at least I got to see the trailer for Prometheus.

Posted by batturtle at 5:48 PM