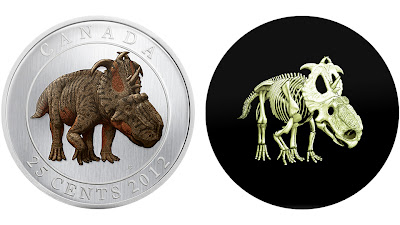 Because the legitimate news media is filled with liars, idiots and immature editorials I naturally go to the fake comedy news sources to get informed about goings on in the world. Last night on The Colbert Report I learned about another thing that secures Canada as the greatest country on the planet. Canada has roughly 85,000 different kinds of quarters in active circulation, ranging from Remembrance Day tributes, to ones drawn by little kids, to sports team logo's. The next quarter added to the roster will be one with a kick-ass dinosaur on it. If that's not awesome enough, the damn thing is glow-in-the-dark so you can see the dinosaurs skeleton. Canada's quarters are better than all your quarters! If they can put glow-in-the-dark dinosaurs on all the money, this totally switches my opinion that currency should get rid of paper and coin and just go 100% virtual.
Posted by batturtle at 1:22 PM