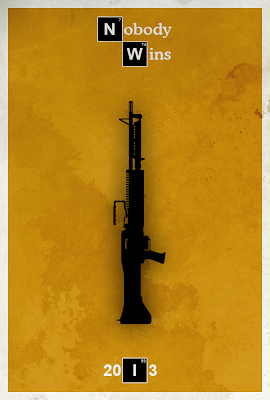 Watched the fifth season finale of Breaking Bad. Actually, TV is weird now-a-days, the next block of eight shows will come out in 2013, but they might be counted as season five as well. Whether the episode is a mid-season break or a season finale, that doesn't really matter in the grand scheme of TV-ness. What is important is that Breaking Bad may end up being the greatest TV series ever produced. Even shows that I worship have off-episodes, or at least a scene or two that don't pan out...not Breaking Bad. Every moment and character and plot-point so far has been completely enthralling, and it may be the all time king of cliffhangers.

There are eight episodes left (I think?), and I am fairly confident that I will watch each one with bated breath on the edge of my couch, cursing the end credit title-card as it hits the screen after some incredibly written and performed chain-of-events. People wasting their time with dance competitions and exploitative reality shows should be ashamed of themselves.
Posted by batturtle at 2:43 PM