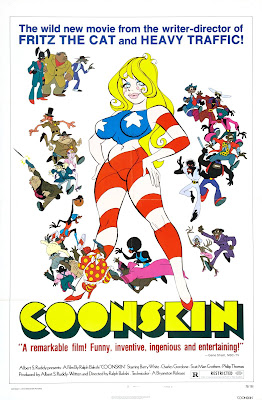 One of my favourite traditions in my home-town is the Ottawa International Animation Festival that hits the city around this time every year. I've loved animation in all forms my whole life, and had even hoped to be an animator for a living at one point in time. That path never played out for me, but it hasn't hindered my love of the medium in the least. Managed to catch a pair of very different animated features today, one from the mid-seventies and one that hasn't been given it's wide-release just yet.

First up was a screening at the National Art Gallery, of one of Ralph Bakshi's controversial classics, Coonskin. An unannounced and unexpected bonus was that the director was there himself to introduce his film. Bakshi's work isn't for everyone to say the least, but there's something about his rough and crass cartoon / live-action mash-up's that I've always been very impressed by. I think it's greatly due to the fact that Bakshi managed to produce a body of distinctive and different than the norm. Especially that at the time cartoons involved such horrible offerings the like of Yogi's Space Race and The Great Grape Ape Show, that Bakshi managed to keep busy and produce popular work was quite impressive. Even if his work leaves you offended or isn't quite your thing, his importance in the world of animation can't be argued.

Then we went behind enemy lines to the Bytowne (I kid!) to see a cartoon from the complete opposite end of the spectrum in every way. Hotel Transylvania is a big budget CG animated film in the Addams Family style from a major studio starring Adam Sandler and a bunch of his friends. What made me interested in seeing the film was that it was directed by Genndy Tartakovsky, who's resume includes Dexter's Laboratory, Powerpuff Girls, Grim & Evil, Samurai Jack, and the awesome original batch of Clone Wars cartoons. I pretty much love everything that he's ever worked on. He was also on hand to partake in a q&a after the screening. The most exciting thing he hinted at was that if this film goes well he very likely may get to do the much anticipated Samurai Jack feature film.

No matter what type of cartoon you may prefer, there's always something worthwhile to see at the fest. It's one of the many great things about Ottawa that I point to when jerks complain that there's nothing to do in this town. One of the biggest animation and most respected animation festivals in the world people! Go watch cartoons!