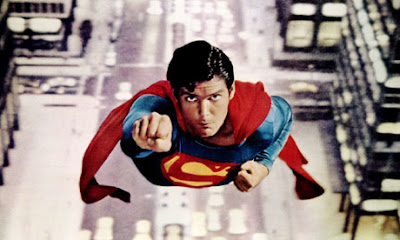 For example, that part in Superman II where he takes off his chest logo and throws it at the bad-guy. There was no mention of this super-ability before, none of it after, and even as a little kid that moment left me with a what-the-hell feeling of confusion. Then there's the part in the original where Lois recites a love-poem to Superman in her mind for what seems like about 15 minutes. Or lest we forget what I'm pretty sure is the worst ending in the history of motion pictures. That's right, I'm pretty sure that Superman has the worst ending to a good movie in the history of motion pictures. All of them! Ever!

Conversely, the combination of the brilliant performance of Christopher Reeve and the still not dated even a little bit flying special effects, the movie is filled with an overwhelming sense of comic book magic that makes you believe a man can fly. Superman has taken flack since the late 1930's for the suspension of disbelief needed to accept that no-one in Smallville or Metropolis might be fooled by the Clark Kent / Superman secret identity. There seemed to be a universal critique that a fedora and a pair of glasses wouldn't fool anybody that Clark spent his spare time in a red and blue caped costume repeatedly saving the world. Contrary to popular belief, after decades of the character being in existence in various mediums, Christopher Reeve stepped in and pulled off the impossible. He made the Christopher Reeve / Superman back-n-fourth completely and shockingly believable.

Catch Superman & Superman II at the Mayfair this-afternoon starting at 12:30pm. Failing that, you have a follow-up chance to see the Man of Steel Monday the 10th at 6pm. Despite their flaws they are a hugely important and enjoyable part of geek cinema history, and will leave you humming the John Williams score for days.
Posted by batturtle at 8:50 AM