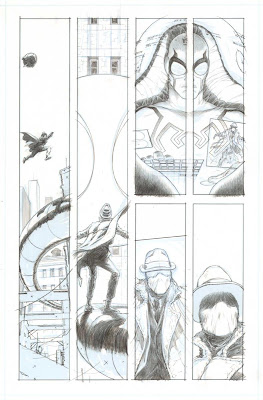 Last night I saw this image in an article written about the highly anticipated and highly kept under wraps DC Comics series written by Grant Morrison titled Multiversity. There's not much we know except that it will likely feature Grant's frequent stable of all-star artist collaborator's, and that it's an alternate universe spanning eight issue mini-series.

New work from Grant Morrison always gets me excited, but seeing a page of Frank Quitely art featuring Blue Beetle almost made me cheer. And I'm not exaggerating or being facetious, if my girlfriend hadn't of been sleeping beside me, I would have cheered. For those not in the know, Blue Beetle was one of my favourite characters of all time, and he was unceremoniously killed in a not quite making sense chain-of-events in 2005.

Blue Beetle was a member of the Justice League of my youth, a team with a little more realism, a little more humour, but still filled with super-heroic action and adventure. The book in which he was killed was a lead-in to a big universe spanning cross-over event, the kind of things that DC Comics do once a year or so. The cover of the book showed a bunch of shocked characters in the background, with Batman holding a shadowed corpse in the foreground.

When I picked up my weekly stash of comics from the comic store, my friend / comic store clerk gave me a lil' paper bag, told me to open it after reading, and that everything would be ok. I went home and read the book in question immediately, and was happy to see that Blue Beetle happened to be the central character. I was in complete suspension of probable plot-line happenings. I knew someone was going to die, my favourite character was starring in a book where someone dies, and with every page I turned I got closer to someone dying. I was oblivious! Until Blue Beetle confronted the villain, and I realized that there weren't that many pages left, and then with a page-flip Blue Beetle had his head blown off.

I was actually upset, which is a testament to the power of comics books. A story told with pen and ink and colour and world balloons can actually put a geek into a tiny bit of mourning. Hence, my favourite character being alternate universally reborn as a character in a book written by my favourite writer has left me a bit excited. I would be more excited if it weren't a year away. Until then I will at least have this art to look at and think of better geeky days ahead. Days where my favourite character not only lives again, but is also being written by a writer that I worship.

Posted by batturtle at 2:42 PM