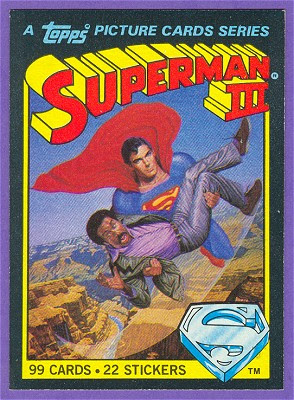 As I said in my previous Superman movie themed post, the whole series is a tricky one for me to praise or antagonize. Superman III lacks Gene Hackman as Lex Luthor, instead stars Richard Pryor as a computer hacker being pressured to assist a wannabe Lex Lutor in his aim for world domination. There's a distinct and noticeable lack of Lois Lane in the movie as well. Not sure what the exact story is, but supposedly either she didn't want to be around to the production didn't want her around. The result is she shows up for a couple minutes in the beginning, announces she's going on a trip, and shows up at the end. The movie also showcases a bizarre metaphysical junk-yard battle between evil Superman and Clark Kent. Upon seeing the scene again for the first time in a couple decades, I still can't quite figure out what it going on in that scene.

Superman IV means well in it's anti-nuclear weapon theme, but thanks to immense budget cuts and rushed production, is the biggest train-wreck of the series. It is also filled with the best and most enjoyable series of continuity errors and scenes that don't make any sense at all.

What both films do showcase successfully of course is the performance of Christopher Reeve. No matter how bad the franchise got, each film remains genuinely worthwhile to see if only for his Clark Kent / Superman portrayal.

Starting tonight at 7:00pm at the Mayfair we wrap up our tribute to Christopher Reeve's incarnation of the Man of Steel with the encore double-bill screening of Superman III and Superman IV: The Quest for Peace. These are not great films over-all, but without them there is no doubt that we would not be in the golden age of comic book cinema the we are in the midst of currently.

Posted by batturtle at 9:42 AM