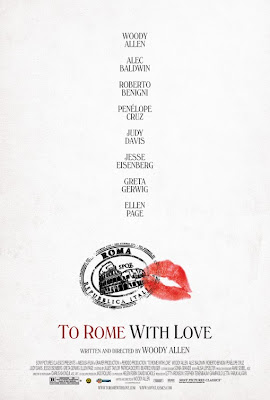 In my younger years, I loved the films of Adam Sandler. I was (and am) a big fan of his cinematic work the likes of Billy Madison, Happy Gilmour and Wedding Singer. I did not like or particularly care about the work of Woody Allen.

Then, perhaps a sign of reaching maturity or growing up a lil' (both of which seem unlikely), my tastes completely flip flopped. I watched a whole bunch of Woody's films thanks to a Bravo film fest...and I think around the same time Adam Sandler stopped caring about even trying a lil' bit at working on good product (with a few dramatic exceptions). Now every time I see a new Adam Sandler trailer I just shake my head at how horrible the thing looks. Every time I see a new Woody Allen trailer I get excited about the new release.

As you may guess from the title, this is another Woody film not set in his beloved New York City. It is a good old fashioned Woody Allen universe of a tale in every other way though, it features a great cast and is the first film he's acted in in quite a while. A Roman traffic guard introduces us into the cinematic world of the film, which involves an anthology of four tales of characters in the city of Rome. Three of the tales are fantastical in nature: an architect visits the apartment he lived in years ago and then strangely becomes an imaginary friend to the current resident, a normal man magically wakes up a celebrity, and an opera director discovers an incredible talent who can only perform in the shower. The fourth story has some comical twists and turns but doesn't quite hit fantastical levels, it features a young couple on their honeymoon who fall into a bizarre misadventure.

Some seemed to not like the weird levels that the film reached throughout, but if you're familiar with Woody's filmography, weird is nothing that out of place in one of his scripts. It also has the blessing and the curse of being the follow-up effort to come out after the Oscar winning and hugely acclaimed Midnight in Paris. It also mayhaps took some deserved criticism that it seemed like at least two of the stories just seemed like unfinished feature length scripts that were given up on and shoved into an anthology.

I'm late in the game at mentioning that we're playing To Rome With Love at the Mayfair, but especially if you are a Woody Allen fan, I highly recommend you catch our final night of screening the film tonight at 9:15pm.
Posted by batturtle at 9:55 AM