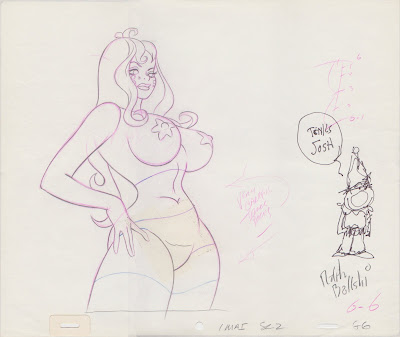 A delayed post for my animiation fest weekend. On Saturday continued what ended up being a heavily themed Ralph Bakshi few days by attending an interview / q&a event with the film-maker presented at the NAC theatre.

He makes for an interesting subject, and had many tales of fighting the animation powers-that-be in order to get his work done. He talked about his controversial career, his distinctive style, and managed to even take questions on his Spider-man and Mighty Mouse work.

I was kicking myself for not bringing my sketch-book in an attempt to get an autograph or maybe even a sketch from him. Other animation students, professionals and fans were smart enough to do so and snuck up and met him before and after the panel.

Luckily he had a table set up outside of the theatre where he had original pieces of animation art from his body of work for sale. One booth had books for sale, and I was going to buy a Bakshi coffee-table book to get autographed, but the original art was just too tempting. The colour animation cels were $195 bucks, which is expensive but I think relatively reasonable for a one of a kind piece of animation history. They also had pencil art for a fraction of that price for $95. My brain was quickly and easily convinced that that was a deal I could not pass up.

I knew if I didn't pick up something that a few days would pass and then I'd greatly regret it. I have never had the opportunity to meet Ralph Bakshi before, and very likely might not get the chance again. I got to have a bit of a conversation with Ralph, really nice guy, and he drew a quick little doodle on the page for me. A friend of mine thought that he ruined the picture, but I love it. Makes it even more one of a kind. Glad to get a true piece of cinematic animation history, even better that it's rather controversial in nature, to put up on my geekily decorated walls.

Posted by batturtle at 1:46 PM