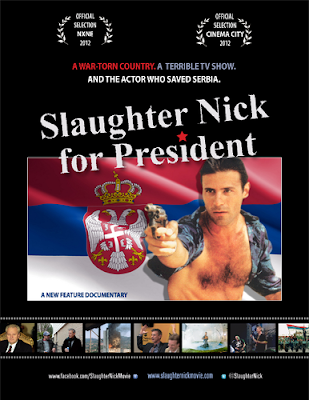 If any documentary could ever fall under the truth is stranger than fiction category it must be Slaughter Nick for President. A down on his luck middle-aged actor discovers that a B-grade action adventure show that he starred on in the 1990's has become a cultural phenomena in Serbia. At home in Canada, he can't get enough work to allow himself to move out of his parents basement. Over there, he is a hero of golden god proportions. He and a small crew set out to meet up with a Serbian band who wrote a popular song about his character, and to investigate if online reports of his super-fame are indeed true.

Slaughter Nick for President is a surprising, funny and endearing Canadian doc that is sure to become a cult classic. Catch the Ottawa premiere tomorrow night at 9:00pm at the Mayfair, with follow-up screenings on Sunday, Monday and Tuesday.

Posted by batturtle at 6:20 PM