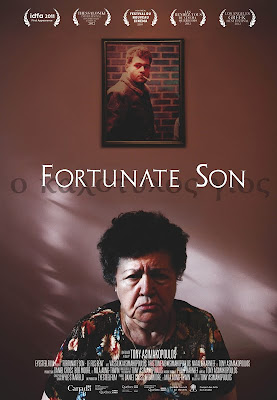 There's a lot I love about being involved with the Mayfair Theatre, but one of the best things is getting to screen indie movies that otherwise might not get onto the big screen and seen by an audience in the city. Via Facebook, I was reading about some film fest success and positive reviews that Tony Asimakopoulos was receiving thanks to his doc Fortunate Son. I know Tony from back in the day at Saw Video and various other film-making circles in Ottawa. I sent him a quick message saying that we should get a screening set up at the Mayfair, time flies by and now that screening is happening this weekend.

Fortunate Son is an unflinching doc about a sons troubled past, feuding parents, and the complicated trek that one takes in trying to get a life back on track. It's at times hilarious and at times heart-breaking, and the kind of immensely brave autobiographical film-making that I'd never have the guts to undertake myself.

Fortunate Son screens at the Mayfair on Saturday September 29th at 4:30pm, with an encore presentation on the 30th at 7:00pm.

Posted by batturtle at 6:32 PM