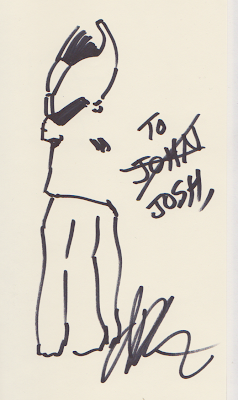 Began a hectic day first full day at the Montreal Comiccon by hosting a selection of short films from Quebec City's Vitesse Lumiere Film Fest, followed by a batch of shorts from the Mayfair. The attendance was a lil' low when the screening started up, but the room filled up much more by the time all was said and done. We started at 11am, and I think that line-ups were much longer than many expected. When we walked in, I again commented that I am spoiled now thanks to friends and professional association the last few years, and I will never ever go to a con again that I have to stand in line for. I take great joy with what little power I have I am able to skip ahead of my brother and sister geeks and walk right into a con.

Attended a William Shatner panel, this is the third time I've been in his presence in three different cities, and each time he excelled in his own certain style of a skilled improved one man storytelling show. There are some overlapping tales thanks to unoriginal q&a questions, like those regarding Twilight Zone or Star Trek. Not that those familiar tales are uninteresting to hear when being told live by Shatner. He really shines and proves his skills at working a room when telling stories about growing up in the streets of Montreal or his passion for horses. Was hoping to also catch the Shatner / Patrick Stewart team-up panel, couldn't sneak our way into that one though.

The highlight of the day was getting to meet legendary comic book artist and writer Jim Starling. Amongst other creative accomplishments (Cosmic Odyssey, Dreadstar, Batman, Silver Surfer...), Jim created Thanos at Marvel Comics. Besides for being a great character, Thanos also happens to be the all time favourite character of a friend of mine. A friend who shamefully backed out of attending the con due to responsible and boring grown-up obligations. I informed Mr. Starlin that my friend would be very jealous that I got to meet him. He asked if I wanted to make my friend really jealous? I of course did. He took my sketchbook and proceeded to draw a nice lil' head-shot sketch of Thanos. Standing near-by at his own artist-alley table was Tom Fowler, who I've known since high school. He yelled over "Get him to put To John, then scratch it our and put To Josh". Jim Starlin did so, and it was awesome. John will indeed be upset by this chain of events, and it will bring me great joy. Because I am evil like Thanos.