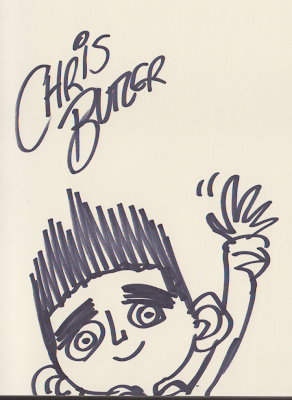 A final delayed post about last week's Ottawa animation festival. On Sunday I attended a behind the scenes panel on the stop-motion animated movie Paranorman, featuring an interview and q&a with the film's writer and co-director Chris Butler.

I really loved the film, and am always interested in sitting in on rare events such as this. After the panel, I noticed that Chris was sitting and chatting with a bunch of animation students, signing autographs and also being kind enough to draw quick Norman sketches for the fans of the film.

This time I was smart enough to bring my sketchbook, and now I'm a proud owner of a Norman sketch as well. During his interview, Chris had discussed how much American films of the 80's like Goonies and E.T. influenced the film. I got to tell him all about the Mayfair, which he was very impressed with and thought sounded awesome. And I got to tell him that by wild coincidence we were showing a trailer for his film in front of Monster Squad that very night. Tat bit of information blew his mind a little bit, and he told me that Monster Squad was a favourite of his and a big Paranorman influence as well. I figured that that would be so, seeing as how Paranorman is about a loser American kid growing up amidst his love of monster stuff who ends up having run-ins with monsters, very similarly themed to Monster Squad.

I invited him to come and check out the film. Alas his travel plans back to the UK got in the way of enjoying some Monster Squad fun. I had been a bit upset about having to at the last minute cancel road-trip roller-derby plans in order to stay home and take care of some Mayfair fundraiser screening obligations. Things turned out well though, and ended up squeezing in lots of animation fest enjoyment around Mayfair screenings and preparations. My derby girls ended up winning their road-game, I got to help out my Mayfair partners, and I got to meet an animation legend in Ralph Bakshi and afilmmaker with a bright future ahead of him in Chris Butler. And I got to watch Monster Squad. A glass half full of a weekend indeed.

Posted by batturtle at 2:08 PM