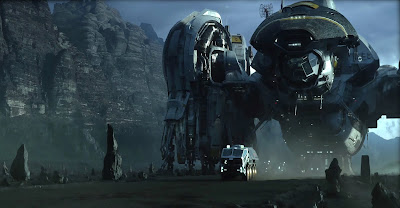 When you see a trailer for a movie that you've already seen, and it still gets you excited to see said movie, it's pretty safe to say that that is an awesome movie. For myself, currently that movie is Prometheus. We've been playing the excellent trailer for the film of late at the Mayfair, and I'll be going to see the movie for the second time this-evening. I rarely venture outside of the Mayfair for my movie watching, only time I do is when there is a free screening opportunity for a movie that I'm dieing to see. Prometheus was one of those films, and I will watch it for the second time on home turf tonight.

I thought Prometheus was great science-fiction. It was a risky endeavour for those involved to be sure, especially considering that it involved an acclaimed director going back to prequel-ize a beloved film that he directed over three decades ago. It was appealing to the die-hard Alien universe fan-base, and I'm pretty sure that it's just as enjoyable for someone to watch if they (have somehow) never heard of a Sigourney Weaver starring Alien picture. It makes me much more confident in the news that Ridley will soon be undertaking a similar venture with a new Bladerunner universe tale. There's nothing wrong with prequels or sequels or remakes or reboots...just take the care and effort to make them good. And this fiml, no matter it's re-hashed origins or basis in unoriginal beginnings, is quite simply very good.
Posted by batturtle at 11:15 PM