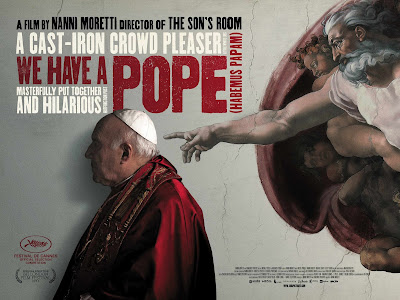 Depending on your religious leanings, We Have A Pope might leave you quite offended. I found the comedic drama of a film to be a very well crafted script featuring some impressive performances, good laughs and surprising twists. I'm not religious though, so I have no fear of a spiteful god striking me down for watching a story that questions the hierarchy and traditions of organized religion. I wasn't the only one left impressed by the film: it was nominated for the Palme d'Or at Cannes, won a Golden Globe for Best Film in Italy, and got a batch of awards from the Italian National Syndicate of Film Journalists.

Tonight is your last chance to see the multiple award winning festival favourite We Have a Pope, at the Mayfair at 7:00pm.
Posted by batturtle at 10:35 AM