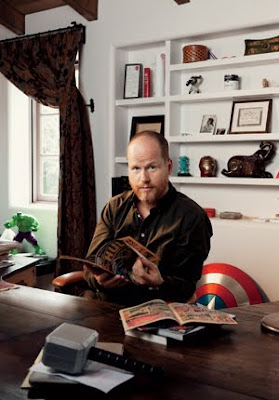 Joss Whedon is writing and directing Avengers 2, geeks world-wide rejoice at the glorious blockbuster movie productions news. Seeing as how Jon Favreau and Joe Johnson and Kenneth Branagh aren't returning to Iron Man and Captain America and Thor respectively in spite of the success of all of their directorial efforts, Joss not coming back to Avengers wouldn't have been the most shocking of things to happen. He could've taken the new-found boost to his directorial street-cred and gone back to do some more Dr Horrible episodes or some Shakespeare stuff or whatever the hell he wanted to do really.

As much as I totally would have respected that might have wanted to leave on top of the Marvel movie universe, I am pretty ecstatic that he's returning to assemble the Avengers sequel. There was also an announcement that joss would work on a live-action Marvel TV series in some capacity. I'm going to jump right to the conclusion that that it's going to be a Runaways series. Make it happen Joss!
Posted by batturtle at 4:20 PM