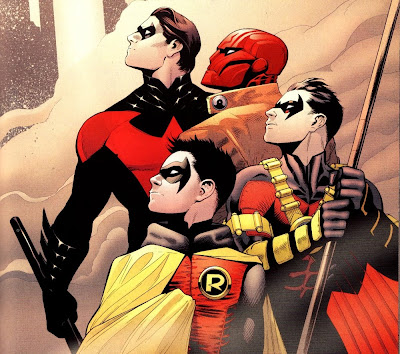 Like any piece of entertainment put out to the masses that geeks consume, The New 52 from DC Comics has taken a lot of flack from comic book readers. Whether it be a series of books, tv shows or a movie franchise, geeks seem to love going to something and then tearing it apart...then buying more of the same thing and then complaining about the same thing some more. A comic store owner once told me that he had a few customers who had been buying X-Men books for years, even though they did nothing but talk about how much they hated X-Men books. They were collectors, at one point they were fans, so there was some form of obligation that they felt they had to just keep on buying.

I will never understand that. I bought X-Men comics when I was a kid. Then in my humble geek opinion, around when I was in high school an artist named Rob Liefeld started working on X books, things went to hell. Years later, my favourite writer wrote the flagship X title, and it was great. On his heels, Joss Whedon wrote some X-Men and shockingly enought I thought it was great too. Then I stopped reading because I didn't like them under their new creative teams and direction. I spent my money and comic book reading time elsewhere.

One of my favourites in the rebooted DC Comics universe is Batman and Robin, from writer Peter Tomasi and artist Patrick Gleason. Batman is on the verge of his 75th birthday, so trying to keep the character and his world interesting must be challenging to say the least. The ongoing twist to the Batman lore that this series focuses on is Batman as father to a young Robin born and trained to kill. A familiar character like Alfred Pennyworth in the grandfather role, Bruce Wayne and Batman as the unplanned parent, and Damien Wayne as the troubled punk-ass child who has a chance to be the greatest danger or maybe the greatest hero the world has ever known. I love the art and I love the story. I don't like the book just because I'm a Batman fan, that makes me a harsher critic at times to the mythology...I don't even like Chris Nolan's version of Batman (clearly I'm in the great minority with that opinion). This comic book is easily accessible, familiar to the batman mythos, and manages the near impossible task of truly adding a new building block to the lore in the form of Damien Wayne and his scowling, hooded Boy Wonder alter-ego.

Are all of the offerings in The New 52 worthwhile? No. If you like Community and 30 Rock on NBC though, I don't think it necessarily means that you'll enjoy fifty other programs on the channel. I think that the publisher is admirable in trying something new, in employing a diverse batch of creators, and not being afraid to take some chances. Now they just gotta explain how Batman went through so many Robin's so quickly.
Posted by batturtle at 6:31 PM