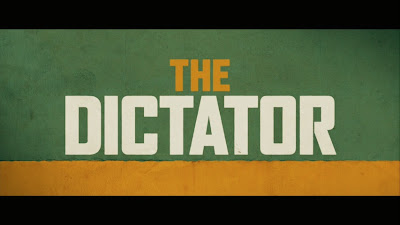 Went to see The Dictator tonight at The Mayfair. It didn't grab me, but to be fair I watched it right after watching The Avengers again, so anything I watched afterwards in comparison might have been hindered a little bit in comparison.

I think that Sacha Baron Cohen is a true talent, and although I know this to be a heady statement, I think he may be the Peter Sellers of our time. He's already proved that he can not only create characters, but he has the uncanny and rare ability to make the characters really come alive within our world. Like Paul Reubens portrayal Pee Wee Herman before him Sacha brought to life not only one character that humans observing thought to be real, but many. First there was ALi G, then Borat, then Bruno, all characters who were thrown into faux documentaries to interact with unsuspecting victims. He also proved that he could handle being tossed into another stars comedy world with a turn in Talledega Nights, kids entertainment with Madagascar, and has gone on to work for directors the calibre of Tim Burton and Martin Scorsese.

The Dictator finds him creating another political comment of a comic character, but with the difference that unlike previous turns, this was a true film and not mockumentary. I have a feeling that pre-scripted comedy is a bit easier and safer of an undertaking than the chaos that was the production of Ali G and the rest. I'm pretty sure that a few times Sacha Baron Cohen's life was genuinely in danger on more than one occasion while he was bravely running around in character. Hence, I could understand that he might want to take a safer turn, if not lazier effort, this time out.

It still has it's laughs, and the always funny Anna Feris, and a very intelligently crafted climactic moment. There were also a ground of kids there with their parents who seemed way too young to be there, and those kids thought the movie was the best thing ever made by human beings. If you want to check out The Dictator for yourself, you can check it out tomorrow night at 9:30pm at the Mayfair (and you can go see The Avengers at 6:30pm too!).
Posted by batturtle at 11:40 PM