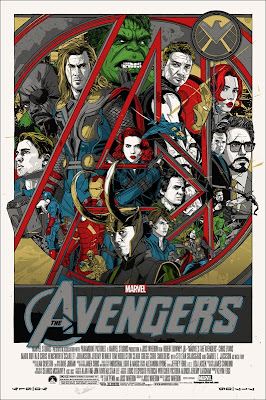 Now that it's not only the third biggest movie of all time with an estimated box office take of $3 bazillion dollars, but also critically acclaimed and a comic geek fan favourite, it might be easy to forget that The Avengers was at one point in movie pre-production history actually quite the gamble. Marvel's tricky master plan to puzzle-piece together a multi-picture comic book style mega-universe on the big screen managed to pay off greatly, with much help from an impressive cast and king-geek writer / director Joss Whedon.

The Avengers is everything that the like of Michael Bay thinks and wishes his overly expensive, train-wreck blurs of confusing looking transforming giant robot movies wishes it was. It's big and loud and and made a whole bunch of money...but it also happens to have great characters, a compelling script, and action and special effects that you can actually follow along with. You will never once think you are out of touch or over the hill and find yourself yelling "What's going on!? Who's that guy!? Is that a good robot or a bad robot!?". Instead you will just sit back and revel in the awesome and the joy and the expert levels of filmmaking on all sides.

On the off chance that you haven't seen The Avengers yet, now is your chance to see it in all it's theatrical glory. It is all to rare proof that every so often the fat-cat Hollywood mainstream can actually get things right. Even if you have seen it, you know that it's well worth catching again before it heads to blu ray land.

The Avengers will assemble at the Mayfair tomorrow at 6:30pm with four follow-up screenings Sat, Sun and Wed, Thurs. It's Joss-tastic!
Posted by batturtle at 3:49 PM