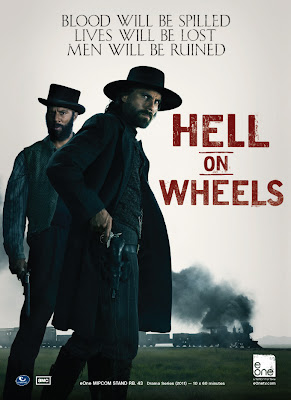 Oh good...yet another excellent TV program to add to the list of shows that I don't have time to watch. I don't understand what's up with AMC. They show heavily edited and censored and commercial filled movies...and in the last couple of years decided to step up and continually produced the most stand-out television programming anywhere. Well, that's not exactly true since everyone seems to be producing the best television of all time. At it's worst, and there still is plenty of dreadful programming, it's shameful to humanity reality programming and another cop or lawyer show to toss onto the sub-par pile.

Watched the first episode of the railway western Hell on Wheels. If you're a fan of revengeful westerns or just plain old excellent dramas, check it out. I was mentally entrenched in the show, then the ending happened and I realized what the crux of the show was going to be and I got really excited. The central character seems very Jonah Hex, and like a character Clint Eastwood could have portrayed in his heyday.

Anyone who says that there is nothing good on TV is completely out of their mind. I wish there was nothing good on TV, then I wouldn't feel so bad about having a social life or being busy at work or having ambitions and hopes and dreams. If only I had nothing to distract me from the wonders of TV. Then I could just sit at home all day in front of the TV and quest through watching all of the glorious entertainment that it provides us lowly humans. Dare to dream.
Posted by batturtle at 3:58 PM