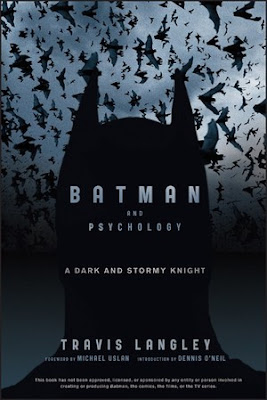 On the drive home from the States today, finished reading Batman and Psychology. See, that is the level of the geekyness that I live by, when not reading comic books I read books about comic books. And in this case, a psychological exploration of the characters and mythology of the world of Batman.

There was a good chance that this book could have been a clinical bore or a pretentious collection of literary nonsense. The writer actually managed to pull off a very well assembled pop-culture read. Not sure if non-geeks would have any interest at all in the subject, but I actually found it of geek interest and real world educational.

What I particularly found of interest was that the writer managed to cover the very wide subject of the many different worlds of Batman. In the book there are segments covering the live action Batman's ranging from the campy Adam West Batman of the 1960's all the way to Christian Bale's dark slightly more real world vision of the character of today. It covers the usual oft referenced work like Frank Miller's Dark Knight Returns, and writes in depth about Batman's beginning's to the current rebooted universe of The New 52.

It is somewhat a text-book, but of interest to anyone who enjoys the Batman lore. Not sure if it would be of interest to many other people, but I think it was written with a pretty specific audience fan-base in mind.

When I mentioned reading the book to a friend of mine they asked if the book was filled with blank pages and one that just said - Batman is crazy. The End. To a certain extent, Batman is of course crazy. Instead of becoming a cop or a lawyer or the mayor of Gotham, Bruce Wayne decided to dress up in a Bat costume and take the law into his own vigilante hands. The writer takes the stance that mane creators and fans and I take though. Is Batman crazy? Well, if he lived on our planet with our rules and our reality...yes. Luckily he lives in a world of crazed clowns, shape-shifting monsters, freeze guns, riddle crafting crooks, supermen and easily escapable insane asylums. So in his world, he's kind of normal.
Posted by batturtle at 11:47 PM