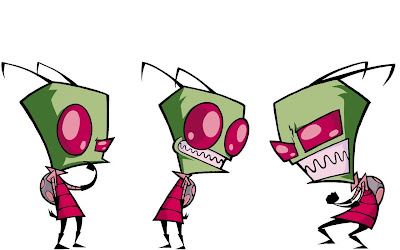 The alien invasion animated comedy Invader Zim is one of those shows that numerous friends have raved about, but I have somehow managed to miss out on. It came out in 2001, so at this point I am more than a decade late in jumping onto the cartoons bandwagon of worshippers. It is now on the Netflix though (or mayhaps has been for a while), and I at long last gotten around to watching the first episode. And, as I had been told, it was indeed frickin hilarious. Amongst other talent involved, Kid in the Hall Kevin McDonald played one of the aliens, and upon interweb research I have learned that TV's Frank from Mystery Science Theatre 3000 wrote for the show. Great, another awesome show to add to the list of awesome shows that I don't have the spare time to watch.
Posted by batturtle at 8:41 PM