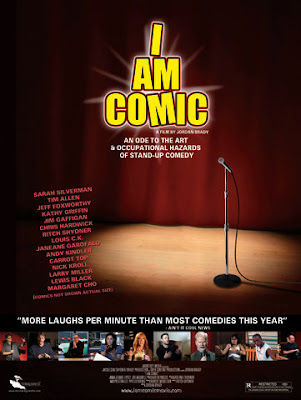 I Am Comic (which I watched on the ole' Netflix) is a documentary tale of a once A-list stand-up comedian and his attempts to delve back into his once successful career. Interspersed around that plot-line are interviews with pretty much every successful comedian in the business...and that is not an exaggeration. The project features a wide variety of comedic talents including some of my favourites, like Sarah Silverman, Lewis Black, Louis CK, Jim Gaffigan and Chris Hardwick.

Although not the most ground-breaking of documentaries, it is an interesting look into the ongoing exhaustive life endangering battle that is the life of a stand-up comedian. The film is also about as low-budget and rough around the edges as the poster makes it to look, but in this form of movie-making sometimes all you really need is a camera and a mic and some interesting people to talk to.

I've heard some folks complain that there is nothing good on Netflix. These people must be even more incredibly lazy than the average couch-potato. Or maybe they don't understand that there are a library of offerings to browse through. I've got a list of like 50 things I want to watch, and I haven't even looked that hard...to be fair, one of those things is Cool As Ice with Vanilla Ice. Just because they have good offerings like I Am Comic doesn't mean I have over-all good taste.
Posted by batturtle at 11:10 PM