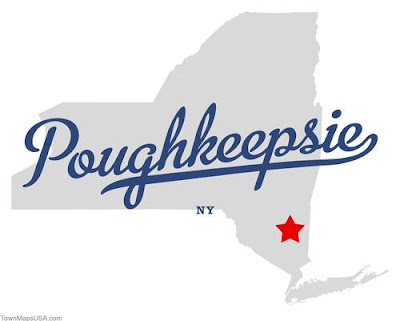 Up bright and early and roadtrippin' down to New York State to help out on some weekend roller derbying with my RVRG posse. Strangely enough, both bouts are not open to the public, which seems very bizarre to me. Even if they are going down at 10am, I would at least make an attempt to sell some tickets and make a few bucks. I would imagine that at least a few hard core fans would show up. It will be weird to partake in roller derby that doesn't have music blaring and fans cheering.

Our final destination is Poughkeepsie...or somewhere in the vicinity of that city. For some reason Poughkeepsie is a very familiar city name, I think it was referenced in a Bugs Bunny cartoon or Abbot & Costello sketch or something like that.

I love these weird derby road trips, it gives me the chance to sit in the back of a car for hours on end and catch up a little bit on my neglected comic book reading. Besides for the general chaos that inevitably ensue from travelling to a different country with a bunch of roller derby girls, it also gives the opportunity to go to places that one would never actually travel to in a million years. No one in the history of the planet has gone there for vacation or to see the sites. That statement is nothing personal against the fine people of Poughkeepsie...but I'm sure that they would agree with me that that is true.

Posted by batturtle at 8:52 AM