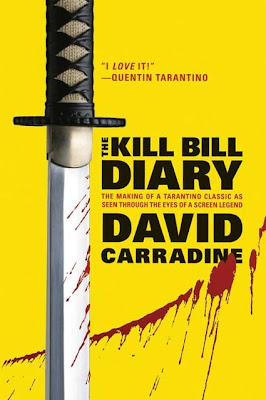 Finished reading The Kill Bill Diary, written by David Carradine. I picked up the book randomly off the bookshelf in the office at the Mayfair. I am far from the biggest Quentin Tarantino fan in the world, my favourite of his directorial efforts is probably Pulp Fiction, but I find all of his stuff past then to be greatly uneven. Inglourious Basterds had moments of real movie-magic genius, but I couldn't get on board with the all over the map cinematic style. I mean, the movie wasn't even really about the Inglorious Basters! Why did he bother ripping off the title from that other movie anyways!? Anyhow...that's a whole other geeky rant.

In fact, my two favourite films that he's been involved in are ones that he didn't even direct. I really love True Romance from director Tony Scott, and From Dusk Til Dawn from QT friend and frequent collaborator Robert Rodriguez. I'm in the minority I'm sure, but I love those movies way more than anything that he directed himself. In fact, I keep hoping that he would again write up a script for someone else cool to direct. I have a feeling that he's become such a centre-of-attention auteur of a filmmaker that that will never happen again though.

This Kill Bill journal has a few interesting behind the scenes tales, but really only of interest if you're wearing a Resevoir Dogs t-shirt and are a card carrying member of the QT fan-club. A good third of the book seems to be Carradine gushing about how awesome Quentin is, though is honest in it's portrayal of the director as an occasional diva and slight madman. Any criticisms and anti-QT-fanboy opinions aside, I will admit that having read the book now I really want to watch the Kill Bill films again.
Posted by batturtle at 5:20 PM